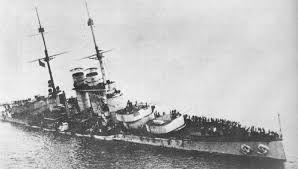 SMS Szent István was a Tegetthoff-class dreadnought of the Austro-Hungarian Navy, the only one built in the Hungarian part of Austria-Hungary. The Ganz & Company's Danubius Yard in Hungarian-owned Fiume (current-day Rijeka) was awarded the contract to build the battleship in return for the Hungarian government agreeing to the 1910 and 1911 naval budgets. She was named after Hungary's first Christian king, Saint Stephen (Hungarian: Szent István). She and her sister ships were regarded as very compact and powerful ships and were the first dreadnoughts in service with triple main-gun turrets.[1]

Her completion was delayed by the start of World War I, but she was commissioned in December 1915. She spent the bulk of the war at anchor in Pola (Pula), leaving harbour generally only for gunnery training. Her final mission began on the evening of 9 June 1918 when she sailed to rendezvous with the other dreadnoughts for an attack on the Otranto Barrage, scheduled for the following day. Two Italian MAS, a type of motor torpedo boat employed by the Regia Marina, discovered Szent István and her half-sister Tegetthoff early in the morning of 10 June 1918 while returning after a night patrol off the Dalmatian coast. They penetrated past her escorts and torpedoed her twice abreast her boiler rooms. They flooded, which knocked out power to the pumps, and Szent István capsized less than three hours after being torpedoed. All but 89 of her crew were rescued. She is the only battleship whose sinking was filmed during World War I.[2]

Her wreck was discovered in the mid-1970s, upside down, off the Croatian island of Premuda. She has been declared a protected site by the Croatian Ministry of Culture and casual diving is forbidden.